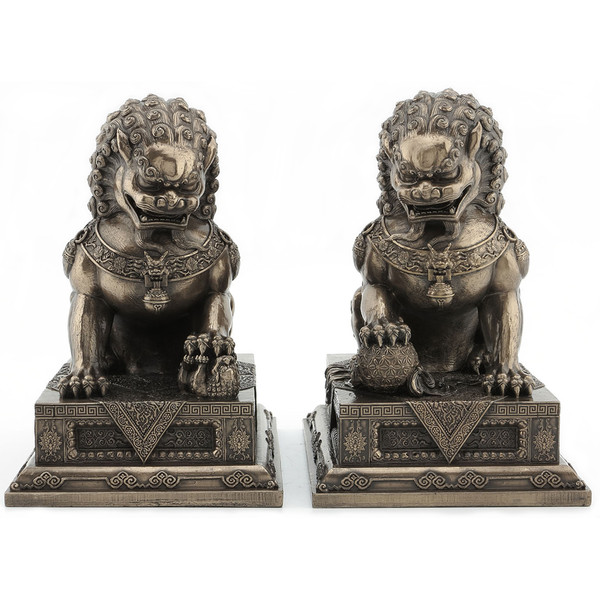 Modeled after the Chinese imperial guardian lions, this foo dog pair has amazing details and vivid expressions. The male has his paw on an embroidered ball and the female has a playful baby cub under her paw. It is believe that they keep away the evil spirits.
This pair of lion sculpture is made with resin casted with bronze power which give them the metallic bronze finish. They are great displayed in entry ways or living rooms, and perfectly sized as a handsome pair of bookends.

The imperial guardian lions (also known as the "Foo" dogs in Western cultures) traditionally stood outside guarding Imperial Chinese palaces, tombs, government offices, and various homes of government officers and wealthy families since the Han Dynasty (206 BC-AD 220). According to legend the Imperial guardian lions possessed mystical powers that protected its owners and their possessions. The Chinese poeple never referred to the guardians as "dogs." During trade routes along the Silk Road in the Han Dynasty, Asiatic lions were becoming increasingly popular commodity and gained its fame by becoming a guardian symbol to the Chinese culture. In Buddhist religion, the lion was introduced in the Han Dynasty as the protector of the Dharma (the Teachings of Buddha). The Imperial guardian lions come as a pair. One is male while the other is female. The female represents yin (symbolically protects people living inside the home) and the male represents yang (symbolically protects the home itself). According to feng shui, correct placement of the lions is important to ensure their beneficial effect. When looking out of a building through the entrance to be guarded, looking in the same directions as the lions, the male is placed on the left and the female on the right. The Imperial guardian lions can also be found in other Asian countries including Japan and Korea and various others around the world.